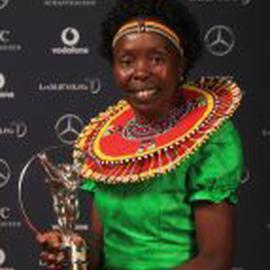 Tegla Loroupe was born in Kutomwony in the West Pokot District of Keyna – situated in the Rift Valley, north of Nairobi. Tegla grew up with 24 siblings; her father had four wives. She spent her childhood working in the fields and looking after younger brothers and sisters. From an early age, Loroupe was given a nickname – Chametia. It means “the one who never gets annoyed.” – reflecting her cheerful personality.

In 1994, Loroupe ran her first major marathon in New York and won. She was the first African woman to win the New York Marathon. As a consequence, she became an important sporting role model. Kenya, at last, had a female runner to rank alongside its talented male athletes.

The marathon proved to be Loroupe’s most successful distance. She won the marathons of Rotterdam three times between 1997 and 1999, New York in 1994 and 1995, Berlin in 1999, London and Rome in 2000 and Lausanne in 2002. Loroupe holds the world records for 20, 25 and 30 kilometres and previously held the world marathon record. She is the three-time World Half-Marathon champion. She has won marathons in London, Boston, Rotterdam, Hong Kong, Berlin, Rome and many other cities.

In 2003, Loroupe founded the Tegla Loroupe Peace Foundation and has been an active advocate for peace. She has been successful in bringing members of warring tribes together in conflict areas in East Africa.

In 2006, she founded the 10km Peace Race, which included 2,000 warriors from six different tribes, who put down their weapon to run in peace in Kapenguria, Kenya. Loroupe said the motivation for the race was to use her fame to help bring about greater harmony.

She is also a member of the ‘Champions for Peace’ a group of athletes seeking to use the power of sport to bring about peace. Loroupe has also sought to advance the opportunities of Kenyan women. She is a role model and has helped many women widen their horizons and enter new fields in peace-making, education, and sports.

Tegla Loroupe was born in Kapsait village in the Lelan division of West Pokot District. It is situated in the Rift Valley, approximately 600 kilometres north of Nairobi. Her father and mother are from the Pokot tribe, a Nilotic ethnic group inhabiting parts of northern Kenya, eastern Uganda and southern Ethiopia.[